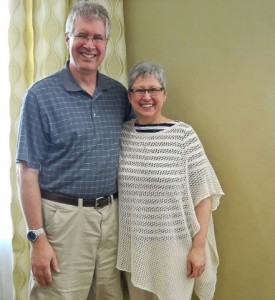 We are Kim and Brad – a singing team called The Synergistics.

Kim grew up singing in Ukrainian folk groups and choirs, and was a church soloist for many years, singing at weddings and other events.

I have been singing in choirs and individually from the time I was eight years old, performing with community choirs and the University Singers at the University of Tennessee.  I also sang with Kim in her church choir, and had the privilege of participating in the “Holodomor” or famine concert with the Bortniansky Choir. A percussionist, I sang and played drums in a praise band for many years.

Together in December 2012, we sang carols for residents at the McCall Centre on Christmas Day (where Kim’s grandmother was residing) and The Synergistics were born.  Since that time, we have performed several concerts for retirement communities and LTC facilities as well as performing for church and private groups, in the GTA.  Beginning in the spring of 2018 we will be available in the Greater Ottawa area.

Performing music that ranges from Folk and Broadway to Pop, Standards and Sacred,  we hope we have brought many smiles to residents and staff alike.  If your organization is interested in booking us for your next function click here or give us a call at 613-713-9383.